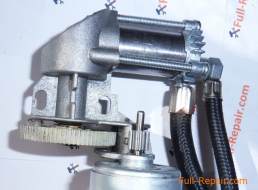 Overload bit burnt compressor motor in the car. Without load it could pump air, but to pump up the wheel could not just stop. Not strong enough motor. It was therefore decided to replace the burned-out motor. Immediately, I note that it is not very cost-justified, the motor is not much cheaper than a new pump, so that the article is for those who like to dig deeper in the art. The motor was ordered on Aliexpress. proceed to repair the compressor Unscrew the four fixing screws (photo taken after unscrewing them). Remove the top cover. We reach the interior of unscrewing the motor that keeps the two screws. Electrical scheme is simple: the motor is connected via a switch. Mechanically, too, nothing complicated: the rotation of the piston is converted into a "back and forth", and in the working cylinder, two valves. One produces the other lets air inside. The new engine will be without the gears, so it... read more 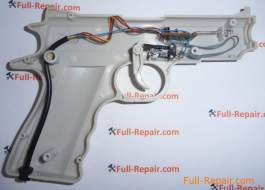 Accidentally I saw in toys gun from the game console Dendy. It is always interesting was what was inside, now I know, and I share with readers. It rests on the four screws. Unscrew and open the housing. Behind the lens is a photodiode in the usual case (a very popular housing for the five millimeter LEDs). Then there is a small circuit. "Trigger" includes it. If the photodiode "see" white box (label) on the screen, and the amplifier will "see" it means the game hit the target. The scheme did not take out on a detailed photograph. Objectives copy was not, the goal was to find out how these internal look. ... read more 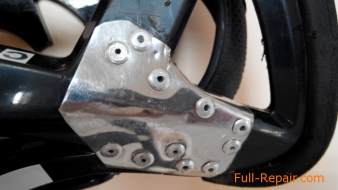 The author of this masterpiece of repair: Nikolai Pavlovich Hazov. In this section, I published because there is nowhere else, it is not a mobile device in the classic sense, but still it is a portable thing. It would seem that with cracked backdrop (which is also called the highback) have nothing to do except throw mount and buy a new pair. But there is a mind that is realized! First, cut out the layout of the board, examples, and then later made two tin plates are sealed with rivets. ... read more 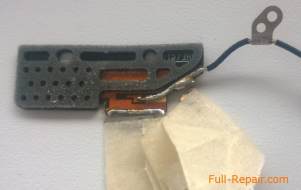 Entered on iPad 2 repair a peeling-screen virtually non-working Wi-Fi. Proceed to disassembly and see what's the matter. First you need to peel a touch screen. If it fits well, it must be warm and to hook around the perimeter of a thin plastic spatula. The author of these lines use a regular plastic card, slightly grind it to the one end it has become acute. It's quite difficult and not a quick operation that requires caution. So do not rush, peel off gently-the sensor is large and thin, it is not difficult to break. And still glued to the screen of the wireless antenna and Bluetooth, which is also bolted to the hull in two places. Otkleivaya, it can break. It is Wi-Fi-antenna slightly to the right front of the round button with a picture of squares. Flex sensor located on the left side of the screen below. This is not to tear. When the screen is peeled off-turn down it. In this case, the screen before someone changes and to... read more

7. How to fix a Mouse Wheel 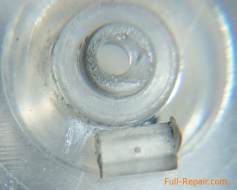 If you have suddenly stopped working mouse wheel (for example, as a result of a fall or any impact). Without prior symptoms of pull is enough page up and down while scrolling while spinning freely, it is likely that this article will help you. Scrolls the mouse wheel Mouse wheel scrolls the mouse, because it broke! In the truest sense, it has fallen off the plastic axis through which the torque is transmitted to the rotation sensor, repair of which is described in another article: mouse wheel does not work. This failure is not a reason to throw away the mouse, if you want 20 minutes-30 tricky (if you go to the store for a new mouse, you probably spend at least an hour). I must say that it is useless to glue, too much of a burden on such a small area to seal the place. Although the author of these lines may be wrong, because he did not even try to glue. If you have a successful experience of sealing these things, I ask people to share in the... read more

8. How to Disassemble Colorfly G708 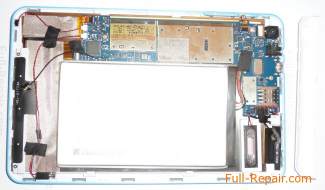 Let us examine the Chinese 7-inch Tablet PC Colorfly G708. So it looks like the front: Back view: Remove the rear upper end cap. She podkovyrivaetsya and removed. Under it we see a connector for MicroSIM-card, as well as a card MicroSD. Just below this cap, we see three screw that hold the rear main cap. Unscrew them and the same podkovyrivaniem will remove the entire back cover. Under the hood we will see a lot of different viscera: the motherboard, battery, camera modules, antenna GPS (top photo-right) Antenna GSM (bottom photo-left). The wiring to the microphone, vibrator and dynamics. The stated capacity of the battery-3000 mAh, among the inscriptions on the battery so you can see the same kind of number "3000". It's just some three thousand, not the fact that this number refers to the capacity, but judging by the test users (here and in Russian here) capacity stated is true. Close-up... read more

How to fix a Mouse Wheel

How to Disassemble Colorfly G708